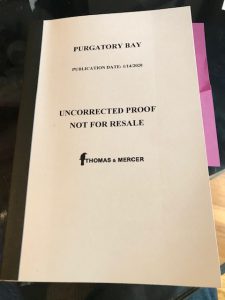 Here’s a galley of PURGATORY BAY, my next novel, due out in January 2020.

It’s the story of Jubilee Rathman, 17-year-old honor student and star soccer goalie, bound for Princeton when her family is murdered in their northern Michigan cottage. Twelve years later, Jubilee carries out a diabolical plot for revenge on those she considers responsible from her fortress on lonely Purgatory Bay near Bleak Harbor.

Bleak Harbor Police Chief Katya Malone must decipher the cryptic clues Jubilee imparts as she leaves a trail of blood across the lower half of Michigan, moving toward Bleak Harbor. Malone is herself reeling from the losses of two young children–her own daughter and a boy who was kidnapped–when she must confront Jubilee’s attempt to abduct a woman and a girl.

When I was nine years old, I read a story in the Detroit News that terrified me. Richard and Shirley Robison and their four children had been shot to death in their northern Michigan cottage. A few years later, my parents bought a cottage up north not far from where the Robisons had died. I would lie awake at night, waiting for a stranger to sneak into our house and kill us all. Those murders were part of the inspiration—if inspiration is the word—for this book. Jubilee Rathman came from somewhere else inside me that I will leave to your imagination.

PURGATORY BAY  is available for preorder now on Amazon.com. Thanks for your support!