It took me 39 years as a professional journalist to get a mention of Bullwinkle into a story. Now I can retire.

Now this is just cool. Thanks to Mark Sadler and Suspense Magazine. Full review coming after it posts on the mag site. 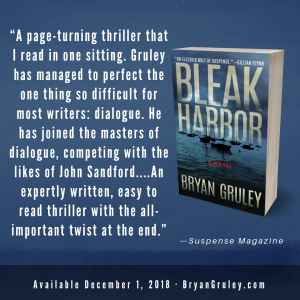 An Excellent Review from Booklist

I appreciate this review in particular because it says BLEAK HARBOR is a tale about seeking justice for the wronged. I did not set out to pursue that theme, but the story worked out that way. 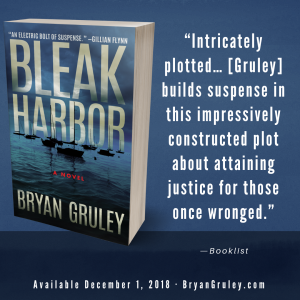 Michael Connelly and ME

I’ll be talking with the amazing Michael Connelly about his new book, DARK SACRED NIGHT, and my new book, BLEAK HARBOR, on December 5 at the Double Tree Resort in Scottsdale, Ariz. Sponsored by the equally amazing Poisoned Pen bookstore. Details here.

On this day 39 years ago, I started my professional journalism career at the Brighton Argus, northwest of Detroit. 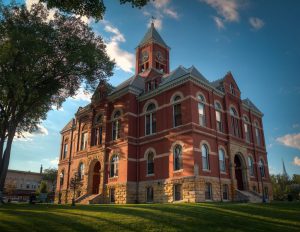 My first job came after a summer that probably didn’t please my Dad after he paid for four years of tuition at Notre Dame. Shortly after graduating, I was working the midnight shift at a wire factory, spot-welding metal baskets for $4.50 an hour. Later I spent a month as a greenskeeper in northern Michigan. Not exactly what you expect from an ND degree.
I had gone to ND thinking I’d be a lawyer. But after three years, I decided I’d had enough school. One of my Mom’s friends gave me David Halberstam’s The Powers That Be for graduation. Although I never finished the book (90-word sentences can wear you out), I was inspired to apply for newspaper jobs. That September, Rich Perlberg and Rolly Peterson asked me to cover Howell city, courts, cops, schools and  sports for the weekly Argus. I started on a typewriter. Weeks later, we made the dramatic shift to computers.
Not long after that, the owner of the Argus bought the Livingston County Press in Howell. Both papers were energetic and independent. Rolly and his Press counterpart happily skewered local politicians and bureaucrats–“the bastards,” as Rolly referred to them–on the editorial pages. I wrote news, features, occasional columns, headlines, photo captions. Staffers gathered for beers and tale-telling at the Brighton Hotel on Wednesday nights. Thursdays were rough. By Friday, I was wondering how I would get 14 stories written by Monday night.
My experiences at the Argus and Times informed those of journalist Gus Carpenter in my Starvation Lake trilogy. The photo here is of the Livingston County Courthouse, which later became the model for the Pine County Courthouse in Starvation Lake. I’m grateful to Rolly, who died some time ago, and Rich, who remains a friend, for giving me a chance and for teaching me what it meant to be a serious journalist. Things were different then, of course, but certain things remain the same. Whether news is  delivered on a cellphone, a tablet, a TV, or in newsprint, consumers want two things: 1) something they didn’t know five seconds ago; and 2) great frigging tales that make them cry or laugh or think or get angry or all of the above. It really is that simple, despite how complicated so-called media experts can make it sound.
I’m not sure I’ll make to my 40th. But so far, so good.