Forty-seven years ago, at the age of 17, I was a rock star for one epic show on a hot summer night.

Now, nearing 65, I will do it again, fronting the same rock-and-roll band for what we hope will be another epic show. I won’t be making any more money (zero = zero) or attracting any more chicks (same) than I did in 1975. But if I learned anything back then, it’s that there really isn’t anything quite like grabbing that microphone and seeing the heads turn to you as your souped-up voice—it took me totally by surprise—commands the moment, the room, the night. Even if it’s only for a few hours.

My late mother would attribute what I just said to my chronic need to be the center of attention. I won’t even try to argue. (“All writers have to be conceited,” a perceptive friend once told me.) Yet upon reflection, I think my happy memory of that long-ago evening and my anticipation of this fall’s redux have as much to do with fear of failure and its polar opposite: the sweet existential beauty of zero expectations.

When I was a freshman in high school, my parents bought me a squat Panasonic radio that I set on the desk where I did my homework. The radio’s telescoping antenna drew crisp signals from four killer stations: WABX, WRIF, and WWWW in Detroit, along with Windsor, Canada’s CJOM–classic rock outlets before the rock of that era was yet “classic.”

This was the real beginning of my musical education. Prior to that, I’d walked to school and church belting out songs by Three Dog Night, the Monkees, and Blood Sweat & Tears. (Imagine a 13-year-old warbling, “And when I die / And when I’m dead and gone …” on his way to confession at St. Gemma Catholic Church.) The Panasonic on my gray metal desk now immersed me in Jethro Tull, Led Zeppelin, the J. Geils Band, the Moody Blues, the Rolling Stones, Yes, Dylan, Mott the Hoople, and Cream. I almost jumped out of my skin when I first heard the opening whomp-whomp-whomp-a-whompwhomp of Bowie’s “Panic in Detroit.” I had no headphones, so my parents were fortunate to have stuck my desk in the basement where they couldn’t hear Tull’s Ian Anderson questioning the foundation of their religious faith, with a kick-ass flute solo thrown in.

Eight-track tapes came next. When I think of those chunky plastic boxes with the album covers pasted on the front, I can’t help but also think of cars, because it was in our cars that we blasted eight-tracks on our way to and from school and hockey and weekend parties at houses where mom and dad happened to be out of town. My car was a black 1970 Oldsmobile Ninety-Eight with red pinstriping, power everything, and a 455 that could push six guys, six hockey bags, a dozen sticks, and two cases of Stroh’s up Interstate 75 at 90 mph as all of us roared, “Wham bam, thank you, ma’am,” to the song blaring from the rear deck speakers. One night, my Ziggy Stardust eight-track got tangled in the player and I flung the whole mess into my Dad’s garage, the knotted tape spooling out like spaghetti.

My first concert was Tull at Cobo Hall in downtown Detroit, Sept. 13, 1973. (I was amazed recently to find the show’s set list online.). We sat on the main floor, twenty-first row, with tickets I purchased via snail mail through a classified ad in The Detroit News. I promptly followed with Elton John, Geils, and Zeppelin. Many years later, I told our youngest daughter that I had seen Bowie twice—on the Aladdin Sane and David Live tours–and she said, “Omigod, you saw Bowie?” Once in a while, it’s pretty cool to be an old mofo.

My friend Pete Klein and I were driving home after a weekend in northern Michigan when we cooked up the idea of putting a band together for a one-night stand before heading off to college. It was August, 1975, the summer of Springsteen’s Born to Run. Pete played guitar and some piano; I endeavored to sing; we’d written a few songs together. Pete knew a drummer, a bassist, and most important, a guy whose parents would let us rehearse in his basement. I knew the owner of a bar I frequented with my lacrosse team. We musicians hadn’t rehearsed even once when Pete, who was into the band Roxy Music, dubbed us The Ritz. A cheesy name, but what the hell, it’s just one night, and it might not happen anyway.

I told the owner of the Yankee Clipper bar that The Ritz would play his place for nothing if he’d let us have the run of the joint for a night. (Remember, I was only 17, one year under Michigan’s then-legal drinking age). The guy was reluctant to turn away his regulars, so instead he proposed this: he’d charge our friends a $2.50 cover that would pay for any and all drinks from 7 p.m. to 9 p.m., after which they’d pay as they went. At first I thought I didn’t hear him right. Two-fifty for anything and everything a bunch of adolescent girls and boys could drink? A packed house was guaranteed. Now we just had to provide the music.

Our studio was the cramped basement in Fred Nemenski’s brick bungalow on Detroit’s far west side. I didn’t really know Fred, except that he graduated from the same high school I did, Detroit Catholic Central, and his mother bowled with mine. (Pete didn’t think his name quite fit a lead guitarist, so he renamed Fred “Troy Charmel.”) We rehearsed two times, maybe three.

Fred, Pete, our bassist Matt Locker and drummer Matt Hathaway were all fine musicians who knew how to play the 20-odd songs on our set list. Not me. I mean, I knew the songs, but I didn’t know all the lyrics, and I certainly couldn’t sing in the register of Zeppelin’s Robert Plant or Paul Rodgers of Bad Company. Instead, I resorted to screaming. I tried to hit the notes, with mixed success, and I divined that Fred in particular wasn’t enthralled with The Ritz’s front man. But I was the one who negotiated that $2.50 all-you-can-drink bonanza. So I would be the guy doing hot moves with the mic wire.

We would all soon would be dispersing to our respective college campuses. Mine was Notre Dame, a place I saw for the first time when my parents dropped me off. I’d be missing my buddies, missing a girlfriend who was losing interest in me, missing the familiar routines of home. I had no idea what to expect. I tried not to think about it so I could just rock out with my pals.

The Yankee Clipper was a smoky boxcar dive with music usually provided by a dimes-and-quarters jukebox. An hour before we were due on stage—there was no stage—the place was jammed, with a line out the door. We set up on a patch of floor near the restrooms. I don’t think I told my bandmates this, but I was scared shitless, afraid of forgetting lyrics, hitting flat notes, shrieking over Fred’s searing solos. I waited in the men’s room, wearing a sequined shirt a buddy made for me, while the boys played the rhythmic opening bars of Aerosmith’s version of the blues classic, “Walkin’ the Dog.” When they exploded into the rocking first verse, something went off inside my chest and I burst out and leapt to the mic. “Met a maid dressed in black,” I sang.

Which was wrong. First line of the first song. Wrong.

The rest of the night was a blur of tunes from the Panasonic. I remember seeing a girl walk past us, in heaven with a tray full of banana daiquiris. I remember a buddy asking if we played any Eagles (we didn’t; no Roxy Music either, come to think of it). I remember feeling amazed, even giddy, at the sheer power of it. I remember Pete, Fred, and the two Matts sounding fantastic, as if they’d been rehearsing for weeks. Me, I made all the boneheaded mistakes I feared I would: botched choruses, blown notes, atrocious off-pitch screeching. It didn’t matter. In the eyes and ears of our peers, we killed it. I killed it. I had a live mic and a riveted audience and that was all that mattered. At midnight, we were all grins and sweat and blessedly numb to the fact that we were about to start our real lives.

Almost three years ago, I ran into Fred at a high school reunion. We hadn’t seen each other in more than 40 years. It was great to catch up. We took a selfie I emailed to Pete, who has remained a close friend. He emailed me back: We’re putting The Ritz back together. No way, I thought. But I knew I wanted to do it. I mean, there are probably hundreds, maybe even thousands, of 60-somethings who can look back on a similar rock-and-roll fantasy. How lucky was I to have the chance to relive it?

Soon, four of our original five were rehearsing in Pete’s suburban Detroit basement. Our first bassist lives too far away so we replaced him with our pal Nic Cocco, who runs a recording studio and has played as a side-man with some major acts. It was late 2019. I couldn’t believe how good the other guys were. All of them have played professionally while holding down high-level day jobs. I’d learned a little guitar, written some songs, and talked my way onto a few stages where I bellowed the Doors’ “Roadhouse Blues.” Again I felt wildly outmatched.

As in 1975, I was on the verge of a transition. I’d decided to retire after 40 years as a newspaper and magazine journalist (though not from writing fiction and other stuff, like this). I could’ve hung on for a few more years but, as I told my wife, I felt like I was done, my motivation no longer in synch with my employer’s understandably high expectations. Which, once I accepted it, was a relief. I recalled something my favorite professor told me in my final semester of college. I was sick of classes and assignments and papers and being told what to do. I wanted to goof off with my buddies and Pam, the woman I would later marry. “You have nothing left to prove at Notre Dame,” my mentor said. “Go enjoy your last semester.”

I’ve moved on from my career. I have hopes now, if not expectations, for new projects. The Ritz is one. Back in 2020, we secured a venue and planned our comeback show for the spring. The pandemic scuttled that, but we stayed in touch. We now have an October 1 date to play at the Token Lounge, one of Detroit’s legendary rock venues. (Cheap tickets here: https://www.ticketweb.com/event/the-ritz-reunion-the-token-lounge-tickets/11674165?fbclid=IwAR0DeHc5WDaxw0xebwq0EIDufH6skpEykie8ozgmCAnP058O1ZYI7R03hW8

Nic recently told Fred that over his years of playing, he has learned that if the lead singer has fun, everything else falls into place.

“Hell, yeah,” I told Fred when he relayed this to me. I’ve since decided that when we do “Walkin’ the Dog,” I’m definitely going to sing it wrong again: Met a maid dressed in black … You can expect it. 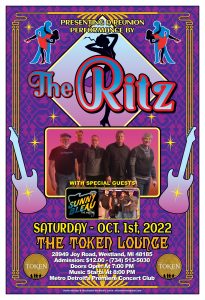