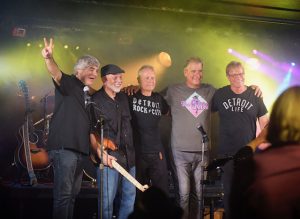 One Saturday evening last fall, this band you’ve never heard of—The Ritz–took the stage at a rock-and-roll joint in suburban Detroit. It was our first gig in forty-seven years. “It’s been a long time since I rock-and-rolled,” I sang in the Led Zeppelin classic that opened our show. Twenty tunes later, we finished with Rod Stewart’s “Stay With Me.” I told the two hundred people packed into the Token Lounge, “We’ll see you again in 2069.”

Turns out I lied.

When we showed up that October night, my four bandmates and I really weren’t sure what to expect—from the audience or even from ourselves. We’d prepared the best we could with two of us living hundreds of miles from Detroit. We knew the chords and changes and licks and lyrics of the songs we’d first performed together in 1975. And, man, I had my cowbell parts down. But what would happen when we actually got up in front of a roomful of people?

I’ll tell you what: We had a fucking blast.

I almost didn’t make it. A few days before the show, my wife and I evacuated our home on Florida’s Gulf Coast as Hurricane Ian barreled toward us. We’d just made the Atlantic shore when Ian swerved south, sparing our area. Now I had to get my butt to Detroit, half a country away with no flights out of Florida. I drove 550 miles to catch a plane in Atlanta. Soon I was sitting with Ritz guitarists Pete Klein and Fred Nemenski at Pete’s kitchen table near Detroit, going through our setlist unplugged: Aerosmith, Bowie, Bruce, Stones, Doors, Mott, Mitch Ryder, Peter Green, etc.

We were three of five guys who formed the Ritz to play an epically loud, raucous, drunken show in the summer of ’75 before going our separate ways to college and jobs and so-called real life. Most of us didn’t see each other for forty years. We decided to reunite after I bumped into Fred at a high school reunion in 2019. Covid postponed our plans, but finally we booked the Token and sold tickets for twelve bucks apiece—about what it cost to see Jethro Tull back in the day.

Once I made it north, we rehearsed for a couple of days in our then-bassist Nic’s recording studio, a room of towering ceilings and walls painted black, the sweet smell of Nic’s pipe smoke (no, not that kind) floating on the air. It took us a while to click. At one point we were quibbling over some rhythm or shift and Nic told us to chill. “People are coming to the show to be entertained,” he said. “Nobody’s gonna care if you miss a beat or play a wrong note.”

Back in ‘75, we performed on a patch of dingy tile in a dive that lured a crowd of our buddies with a $2.50 all-you-can-drink cover charge. This time we had an actual stage, a superb sound engineer, an actual light show, and a full house of people quaffing beverages that, alas, were a bit more expensive than before. They probably had low expectations of a band that hadn’t played together since the Detroit Lions weren’t horrible (or, wait, yeah, the Lions were pretty bad in the 1970s too). But I suspect we surprised them. Hell, maybe we surprised ourselves.

You might expect me to say it was all a blur, but it really wasn’t. I remember plenty of details, especially my mistakes. I screwed up the ending of the opener, scrambled the lyrics to Tull’s “Locomotive Breath,” and skipped an entire verse in Ian Hunter’s “Once Bitten Twice Shy,” earning me a sideways WTF glance from Pete.

If the other guys messed up, I missed it. So did the crowd, which danced and cheered and sang along, led by drummer Matt Hathaway’s awesome twenty-something son Shane and his pals in the front row. When the show ended, I think everyone wished we had one more song to play. Or two or three. But the Reunion of the Ritz was over.

Or not. I mean, we’re only in our mid-sixties, so why not have a fucking blast again? Why not a Ritz RE-Reunion, this time with our original bassist, Matt Locker, who couldn’t make it last time? You can be part of it on Saturday, April 29: https://www.ticketweb.com/event/the-ritz-reunion-the-token-lounge-tickets/12817755?pl=token&REFID=clientsitewp. Your expectations should be higher, which is great because I’m determined not to botch more than two songs.