Bloomberg News recently published two stories of mine that are among the most difficult and–I think–the most important I’ve ever written.

As the Baby Boom generation begins to move into its late 60s and 70s, the stories ask this question: How do you know when a person with dementia has the mental capacity to consent to sex?

I don’t mean to blow my own horn, but I think the stories are worth reading, whether you think they’re well-done or not. They generated more than quarter of a million hits on the Bloomberg.com website, another 40,000-plus and our proprietary terminals, and were featured on NPR’s All Things Considered and the PBS Newshour on television.

Here are the links:
http://www.bloomberg.com/news/2013-07-22/boomer-sex-with-dementia-foreshadowed-in-nursing-home.html

Summer showed up this past Saturday in Chicago. “Whoa,” Summer said. “It’s June already? I guess I’m a little late.”

All is forgiven (until next year). Chicago was the place to be this weekend, whether it was Ribfest, Midsommerfest, Bluesfest, Printer’s Row Lit Fest, or the Wells Street Art Fair (not sure how they got away with not being a “fest”).

I spent Saturday at Lit Fest, signing books and talking with fans at the Mystery Writers of America tent, then joining Libby Fischer Hellman, Brian D’Amato, and Alec Nevala-Lee on a panel expertly moderated by Bob Goldsborough (the author who has continued the Nero Wolfe tradition). I was a little out of my league with someone like Brian, who brought a bottle of perfume to illustrate the meaning of noir (I kid you not), and Alec, whose knowledge of film surpasses my knowledge of just about anything except maybe burgers and hockey. It was fun and I learned a few things.

Then came the best part: hanging out at Kasey’s Tavern on Dearborn with fellow authors Marcus Sakey, Mike Harvey, Jon Steele, Jim Garner, and Kevin Guilfoile. We saved the world several times, then forgot how we’d done it. Back to the laptops.

I heard that later that night the local hockey team won a big game.

Sunday wasn’t quite as sweet weather-wise, but better than those November days of the previous week. Pam and I met old friends for lunch at 11 Cafe in the South Loop, where I reintroduced myself to superb pastrami. Then we sat back amid the trees at the Pepsi stage at Bluesfest, drank a beer, read the Sunday papers, and listened to some excellent blues.

Back to work today: fiction, non-fiction, and a Cubs game tonight (yes, watching the Cubs qualifies as work, especially if you’re a Tigers fan). Tomorrow night, I’ll be heading to the Hidden Shamrock at 6 p.m. to celebrate the release of Michael Harvey’s new thriller, THE INNOCENCE GAME. You’re invited. Show up and Mike will buy you a beer!

The paperback of THE SKELETON BOX is out. You can buy it at your favorite bookstore or online. The book completes the (accidental) Starvation Lake trilogy and has garnered terrific reviews. AP said it’s my best work to date (although AP probably hasn’t seen my WSJ story on the summer travels of the Stanley Cup, which was probably my most FUN work ever).

Thanks to all the readers who support my work! 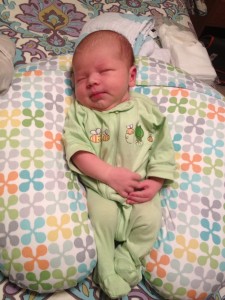 My thoughts and prayers go out to all the people of Boston, especially the victims of the bombings and their families. Watching from afar, I’m inspired by the courage and resilience with which Bostonians have responded to this tragedy. As Dennis Lehane put it in a stirring New York Times essay, the terrorists’ cowardly objective was thwarted the second that civilian bystanders, with no fear for their own safety, raced to help those injured in the first blast.

I hope we as a nation can take our cue from Boston and embrace dignity and courage in the face of evil rather than anger and hate. I hope especially because, in another week or so, our daughter Kaitlin and her husband Andy will bring a new person into this world, a boy named Sawyer Brooks Stoutenburgh. I want Sawyer to know from the first breath he breathes that this is not a world of fear and rage, but one of love, family, friendship, and faith in all of those beautiful, sustaining things. When Sawyer reads about the Boston Marathon tragedy in school one day, I hope he’ll understand that evil was defeated by a brave and faithful people. Fear and rage are death. Love and faith are life. I can’t wait to watch Sawyer live life!

It’s been a while since I’ve written here. Maybe I was just too overwhelmed by the response to the offer of a free Starvation Lake T-shirt. Anyway, here’s what’s going on in my world of writing, fiction and non-fiction:

The paperback version of THE SKELETON BOX comes out Tuesday, June 4. Still figuring out what I might do to celebrate (maybe a coupla beers), but I do have a few library events already set in Howell, Paw Paw, Grayling, Central Lake, and Beulah, Michigan. Look at the Events list to the right for details.

I know you’re all as shocked and crushed as I am that THE SKELETON BOX did not win a Pulitzer Prize. But it was named a Michigan Notable Book for 2012 by the Michigan State Library, for which I’m deeply honored and grateful. Alas, I can’t make the April 27 gala in Lansing because it’s right around the same time that we’re expecting Sawyer.

John Gray, director and screenwriter, has completed a screenplay of THE HANGING TREE, and our agents are shopping it to actors and financiers. Catch-22 is that actors often don’t wanna read a script that doesn’t have money committed, and money guys are reluctant to read unless a couple of actors are in. Fingers crossed. John did a great job on the script, changing it in significant ways so that the film could remain faithful to the spirit of the book. My only disappointment is that Soupy Campbell is not in the film. Maybe the next one.

My friends at Touchstone/Simon & Schuster offered me a contract to write two more Starvation Lake books. It was a generous offer, but after a lot of cogitation, I decided to turn it down. It wasn’t an easy decision, but I felt like I was done with that series–at least for now–and wanted to challenge myself. I’m lucky in that I have a day job that pays me well enough that I can afford to take a chance. Or at least I think I can.

I’m working on a new book, with the working title THE LAST OF DANNY, about the abduction of an autistic 15-year-old boy from a couple whose marriage is in trouble. The story will be set in a posh resort town on the southeastern shore of Lake Michigan and in Chicago. I’ve gone through a couple of different detailed plans for the story, and am now in a good writing groove. I’ve been writing six mornings a week and am having a lot of fun with it. But, boy, is it difficult. I can’t just reach for a handy scene at Enright’s or a flashback to the Detroit Times. My writer pals have been extremely supportive. I’m a free agent, publisher-wise, so it’s a little like starting all over.

More soon. Thanks for your infinite patience. Wish me luck with Danny!