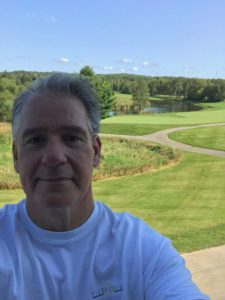 A: I started dreaming about writing chapter books when I was reading Hardy Boys mysteries in second grade. But I didn’t publish my first novel until I was 51 years old.

Flag me for rationalizing but, looking back, I think things happened the way they should have. The truth is, I never lost sight of my dream. I just took a detour: journalism. Without it, I doubt I ever would have written any serious fiction (wildly assuming, of course, that you consider my made-up stuff serious).

Reporting and writing non-fiction taught me a lot that I use to tell my imagined stories: Discipline. Deadlines. Organization. Research. Word economy. Observation (not just sight and hearing, but smell and taste and touch). Dialogue. Narrative. And respect for the wishes of readers who would prefer to have me blow up a car than ponder the meaning of life (or, for that matter, hockey).

More important, I spent a lot of years living before I attempted my debut, STARVATION LAKE.  There’s no way I could have written a coherent novel with the slightest trace of maturity when I was in my 20s or 30s. Not to mention that I was a little busy helping Pam bring up our three children. I did a lot of fantasizing about the novel-writing, though. My late pal, the writer Brian Doyle, once told me that really all I wanted was to sign books at my first reading. It was a jab; Doyle didn’t think I was serious about fiction. Years later, he wrote me a long note about how the both of us had become real writers by writing thousands and thousands of words.

My journalism career is winding down after nearly 39 years. I look at that as an opportunity to crank up the truly fake news of my novels, using all the skills I learned writing the non-fiction stories I’ve written since I joined the staff of the Brighton Argus in 1979. For the record, I have yet to blow up a car in any of my novels. But I’m writing a new one, so who knows?

P.S. I’m writing this from a golf course near Cadillac, Mich., on my way to an annual boys weekend Up North. 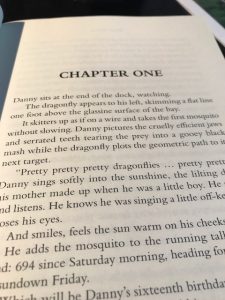 A: BLEAK HARBOR opens with a scene of 15-year-old, autistic Danny Peters standing at the end of a dock, following a dragonfly: “It skitters up as if on a wire and takes the first mosquito without slowing. Danny pictures the cruelly efficient jaws and serrated teeth tearing the prey into a gooey black mash while the dragonfly plots the geometric path to its next target.”

Making Danny obsessed with dragonflies was one of the semi-random choices I make as I conjure up characters. The choice was influenced by a story I had read in The New York Times in April 2013. The story said dragonflies are often listed with ladybugs and butterflies on lists of insects people like. Yet dragonflies are also “voracious aerial predators” that “may well be the most brutally effective hunters in the animal kingdom.”

This dichotomy fascinated me, perhaps because I find dragonflies to be creepy even though I know they cannot harm me. Danny sings a song his mother made up about dragonflies:

Their wings are sparkly gossamer

They wear diamonds on their eyes

Yet Danny recognizes how dangerous they are in their world and indulges this recognition by counting the number of mosquitoes the dragonflies on Bleak Harbor Bay consume. The duality also serves as a metaphor underlying the tale in BLEAK HARBOR.

At my urging, my publisher, Thomas & Mercer, prepared a few covers that included dragonflies. They didn’t really work. But then T&M included a single dragonfly on the spine of the book between the title and my name. I can’t wait to see it when the hardcovers show up. 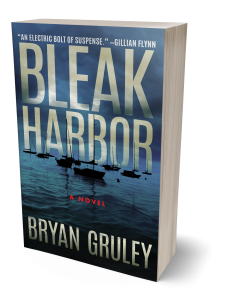 It was spring of 2012 and I was nearing publication of THE SKELETON BOX, the third book in the Starvation Lake trilogy. A major editor at a big publishing house was talking to me about writing “your Mystic River.” Right. But, of course, I was seduced, and listening.

I gave her a summary of an idea involving an uncaptured serial killer who resurfaces years after his original murders. Serial killers are passe, the editor said. I tried again, this time with a totally different idea about the kidnapping of an autistic boy. I’m not positive why I chose to make Danny Peters autistic, but I have an inkling that I can’t share without crossing into spoiler territory. The editor liked the idea, but ultimately passed on publishing the manuscript. I could literally use parts of her rejection as a blurb.

I have clear recollections of the things that inspired my first three novels, from a nightmare about a snowmobile washing up on a beach (STARVATION LAKE); to a tree filled with shoes (THE HANGING TREE); to the early 20th century murder of a nun in northern Michigan (THE SKELETON BOX). I have no such clarity about the beginnings of BLEAK HARBOR, alas.

It really came to life on the page. Danny himself, his mother Carey, and his stepfather Pete all took turns inspiring story twists by making me curious about who they were and how they would behave under pressure. I can more clearly explain how I came up with the ideas for many particular things that happen in the book, but not where the story itself initially sprang from.

Mostly my ideas, big and small, sprout from the process of writing itself. As John Hiatt, one of my favorite songwriters, recently told an interviewer, “You know how writing goes for me. I get a couple of lines going, and then I just tag along as the songs start to reveal themselves. You’ve just gotta jump inside and take the ride.” 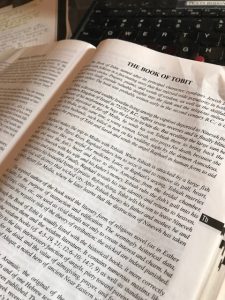 To be honest, though, my choice of Tobit was also somewhat arbitrary. I don’t know precisely how it will figure into Ophelia’s story. But I assume that it will help me understand and render Ophelia.
I make such random decisions often in my fiction. I think it reflects my journalistic experience where, as I report stories, I frequently encounter unexpected facts that I cannot change or ignore but must decide how they work in the tale I’m telling. I welcome these because if I’m surprised, the reader is likely to be surprised too, and surprise keeps readers reading, fiction or non.
I suspect Ophelia will surprise with Tobit just as Danny Peters, the autistic boy who’s kidnapped in BLEAK HARBOR, surprised me with his love of Wallace Stevens’s poem, “Of Mere Being.” I chose the poem at random. It helped me understand the boy and his crucial relationship with his mother.